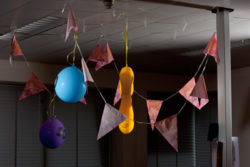 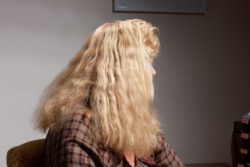 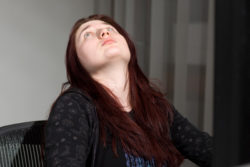 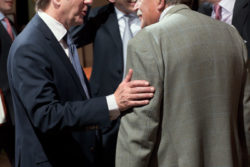 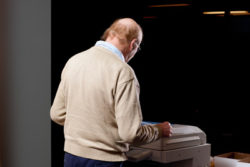 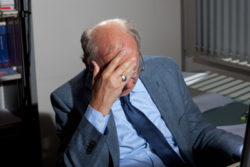 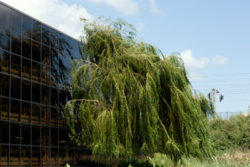 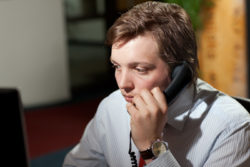 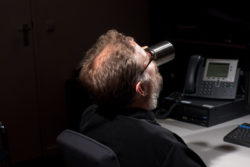 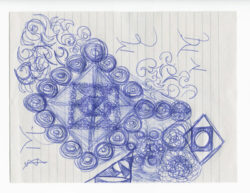 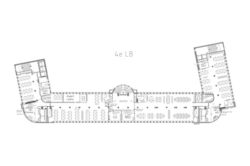 In your current book “how terry likes his coffee” you investigate the typical office working environment. The book starts with ball pen drawings that look like they were made during a boring telephone call and others that look as if they were made during a group brainstorming session. Can you tell us something about the drawings and why you decided to use them at the beginning of your book?

I found these drawings in office trash cans and tore out a few from old notebooks. After a while, people at different companies started collecting them for me. They are a way of giving a voice to the people in my book, making visual what I can’t visualise with my images. A camera is always limited to showing the surface of things; these doodles are a way of trying to get beyond that. Me and designer Sybren Kuiper, known as SYB, came up with the idea of designing the book in the style of a notebook. So it made sense to start the book with these doodles, on paper that mimics the feel of typical notebook paper. They put the readers in the right mind-set before they see the first images.

You combined the photos inside the book with architecture ground plans. Can you explain the intention behind this? Are these ground plans from the companies where you took the photos?

The ground plans are from various office floors in which I took my images. They have more than one function. First of all they separate the chapters, but what I find even more interesting is the way they provide another perspective on the same subject matter. My book is about feeling distanced from your daily surroundings and from the people around you. To me one of the causes of this lies in the pre-occupation of office culture and of our society as a whole with a rational way of interpreting. Reducing and over-simplifying our experience of reality. These maps can also be read as an expression of this belief.

Was it difficult to find companies that let you shoot photos with this very critical approach?

When I started I didn’t have any idea of what I was going to tell in the book. Of course I had some personal experiences, but I wanted to be as open minded as possible. I had no intention of criticizing office culture. My view is that the end result is much more a poetic reflection than a sharp-edged critique. With this in mind, it’s easier to understand how I got permission.

Even though I had no hidden agenda, it wasn’t easy to get in. But after having mailed and phoned about twenty to thirty companies I finally got lucky. Once I had taken my first real office images it was easier to get into other places. After a while the word got out that I was photographing this subject and people would help me get in touch with the right people. Once inside it was important that one of the persons in charge would legitimize my presence by sending an internal memo. I could then just walk around the building, talk to people and observe what they were doing. If I thought I was seeing a glimpse of something meaningful I asked them if it was all right for me to photograph them while they were working. Most of the people I asked said yes. I was sure to sit still and make as little sound as possible. They would continue working and really forget about me after a while, even though I was sitting only about two meters away.

There were different kinds of office atmospheres, ranging from energetic and stressful ambition to comfortable dullness and everything in between. A longing for intimacy, for feeling something real again, for a real connection with another person and to their daily environment appeared to be something universal. There were a lot of similarities between the office jokes I became part of, some of them were quite funny. Humour seems to be a big part of office environments, perhaps because it’s a good way of keeping everyday life vibrant.

What about the people who worked in the companies. Did they seem happy with their jobs?

Enjoying a job differs from person to person. I’ve met people doing the same work with a totally different attitude towards it. Perhaps it has to do with where you (think you) get your sense of accomplishment from. Office work is much more than a chair, a desk and a Dell computer. It’s also colleagues, gossip, free coffee and the occasional jokes. There is a difference between how things seem, and how things really are. Happiness is not the same as smiling when photographed. It’s about having a sense of purpose to your life, meaningful relationships with others mostly. That’s hard to express while working behind a computer screen.

You also shot some pictures of party decorations from company parties for your book. Did you join these parties? How was the atmosphere there in comparison to the working atmosphere?

I attended a lot of Friday afternoon drinks. Most of the offices I went to had little pubs inside their building. Although these drinks gave the impression of being informal, etiquette and status were carried over from the office floor. Contact was limited by these factors; this showed itself in the different, often awkward ways people touched each other.

Can you tell us something about the trees at the end of the book? Do these trees stand in the near neighbourhoods of the documented companies?

All nature images were taken around office buildings. I noticed there was something very meaningful in wild blowing leaves lit by harsh sunshine. To me they relieve the tension built up inside the office space, flowing out at the end of the day, through the doors, through the branches of the trees. They also emphasize the feeling of having been inside the whole book. The use of diptychs comments on the different experience of time inside and outside the office.

Do you want to work in this area again? What are your plans for future projects?

I love hunting the office plains for meaningful imagery, drinking office coffee, eating Dextro Energy, but I have told what I wanted to tell for now. Since “Terry” I have finished and started a few different projects, in which I am still examining daily life and the different causes for feeling disconnected from it. One of these projects, “On Blue Jeans and Linoleum”, has been exhibited at the Cobra Museum of Modern Art. Currently, I am examining life in newly built housing areas. Documenting people’s private lives. The way in which men and women struggle in their relationships and in their ways of creating a personal connection to the places they live in. This is a long term project on which I have worked for about a year now, it might very well be finished within the next twelve months. I would love to publish more photo books, and tell many more stories. Recently I have also started teaching workshops, which is something I also enjoy doing very much.

Florian, thank you for this interview.