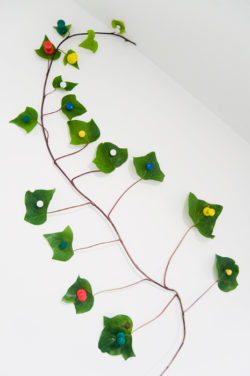 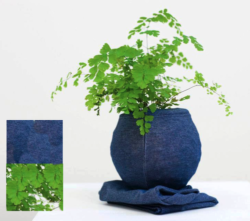 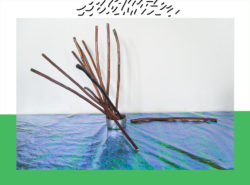 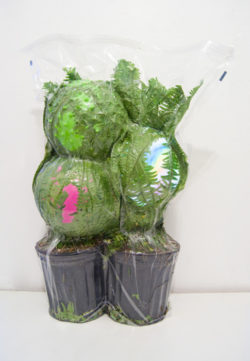 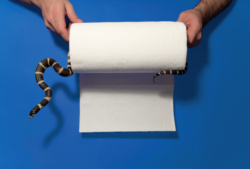 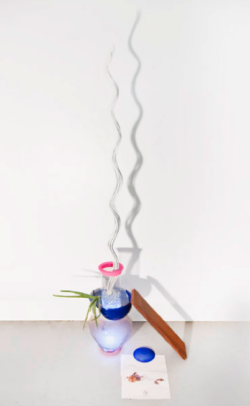 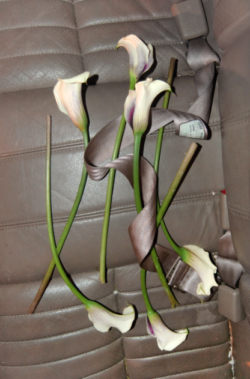 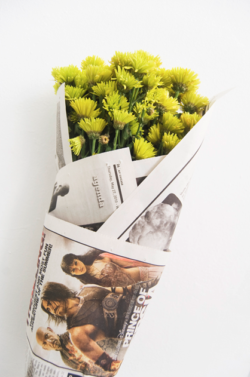 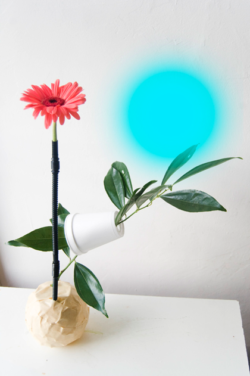 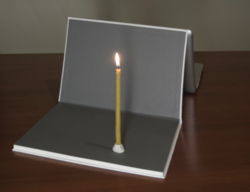 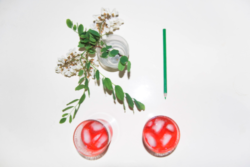 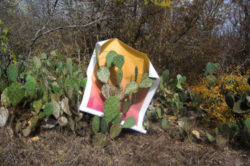 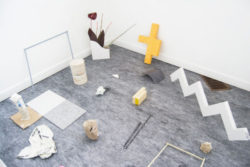 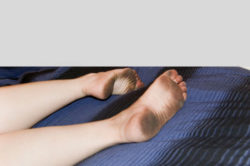 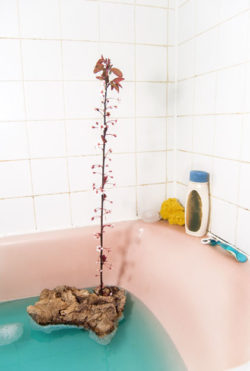 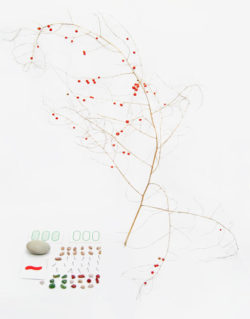 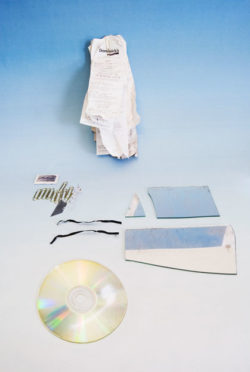 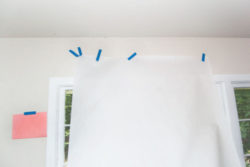 How did you develop your distinctive way of creating your artworks? Most of your works share similar elements, for instance the typical still life style set-up and plants. You also use sculptural aspects and you have multiple layers of processes: first the physical construction, then the photo, and then the digital processing in a graphics software. Have you always worked this way or was it a longer process to get to the point where you are now?

Most of my photographs develop out of everyday activities, like moving objects in my house and noticing the differences that happen when they are paired with new objects or settings. Sometimes I will collect objects for a certain shoot, but often they are sourced for objects that have been accumulating over time. One of my favorite activities is shopping at dollar stores, thrift stores, and gift shops. When I was living in Chinatown in Chicago for the past few months, I made an effort to go into every shop in the area. Not only do they have weird objects to purchase, they also have strange displays and combinations of items that I never would have come up with on my own. Once the image is made into a photograph, I edit it on the computer. I have always been interested in editing and I think a lot of people don’t understand how much most of the photographs they see in advertisements etc. have been altered, and that most cameras automatically edit the image with software built into the device. Editing the image means having total control over how the image looks, whether you are attempting to make it look “natural” or enhancing certain colors or elements to make objects stand out etc. Playing with other tools in a program to make color blocks or swatches is just another version of collage or painting and acknowledging that the image is altered. I have become more interested in that aspect recently in terms of a relation to advertisement and graphic design in popular culture, using techniques that are express information to the viewer.

Did you grow up in a garden center near the office supplies basement?

I grew up on 18 acres of land on the outskirts of Austin, TX, in a house in which my parents began their sustainable building non-profit. When I was very small their office was in our house, and I would always end up playing with the office supplies to make drawings or other objects, and stacking different colored beer bottles with my dad, who at the same time was making a light structure using colored bottles and an organ pipe. I always used what I had around me, whether it was making collages out of magazines or using radishes from the garden to draw pink lines on white printing paper. I wanted to be a botanist when I was young, so collecting and identifying flowers was a fun activity, and sometimes I would use a spray bottle to paint flowers bright colors.

Your works oscillate between artificiality and naturalness. What holds you in the middle of these two poles? What deters you from doing artworks with only natural or artificial components?

I think it is very important to acknowledge the artificiality of nature. I am not interested in fantasy. I recently went on a hike in the redwoods 15 minutes away from where I currently reside in Oakland, California and was surrounded by old-growth forest. But all around me were signs of culture such as extremely well kept paths, and benches. Even a nudist hiker, who was dressed in a hat, sneakers, backpack and some kind of penis sock. It would be impossible to use only natural elements, since the act of photographing a landscape, or picking flowers, are both cultural acts. Though some artists may attempt to “hide” that fact, I like to emphasize the artificial to express our current relationship to the natural world.

Do you use real living plants or are they artificial?

I enjoy using living plants in a way that makes you question whether they are real or not, sometimes using them in a way that is harmful. I like to take inspiration from the way I see others use artificial plants and inflict similar gestures onto live plants, such as push-pinning ivy to the wall or vacuum-packing ferns.

Is it important for you to work with something that is alive?

When something is alive it is more colorful and you are aware of the moment. If something is dead or non-animate, you lose the idea of moment or immediacy that I like. I like working with lights for that reason, it can imply artificial life in something inanimate.

Where do you get your inspiration from?

When I look through your works I mainly see the colors green, blue and white. Red is mostly missing. Is there a reason for this?

Red is a very strong color, I use it sparingly and more often it is in the form of pink or orange or brown. Greens and blues imply a natural freshness, like the Sprite logo. In a lush landscape, you mainly see the green of the flora and the blue of the sky and/or water. Reds are rare, and when seen, in the form of flowers or fire or sunset, they are striking. I like to use red with limitations, if used too much it would just make everything loud and its presence would be less surprising.

The computer screen/internet is the main platform for my work. Even for a gallery show most people will see the work in documentation on the internet rather than in real life. I like to document my shows just as my other photographs are made, so they then exist in reality and sometimes become something quite different in an image on the screen.

What are your plans for the near future? Any exhibitions, books or so planned?

I moved across country from Chicago to Oakland, California last month so I am trying to slow down a little and take time to adjust. But a do have a few things coming up, including a pop-up show during Art Basel Miami with The Perfect Nothing Catalog, and photograph in MANY MANY HOUSE WEAR 2 out of Australia. I am in the beginning stages of a book with Uni-Press, and have some shows in the works for in Chicago and L.A. in 2013.